Just like Scouting has merit badges, bikers earn their patches, and the military has awards and morale patches, we wanted to create something for the Haunted Attraction and Horror people out there. We thought that calling them “Haunter Scouts” might get us into trademark troubles, so we have called them Scareit Badges for our merit badge system.

Both of the founders have been involved in the Haunted Attraction industry for years – whether it was acting in a charity haunt, running their own haunts, running a regional haunt-related website, and then becoming co-hosts on a podcast, HaunTopic Radio.

One year at HAuNTcon we saw a group of haunters all wearing identical black short-sleeved shirts with their names, positions, and some other badges and were blown away with their presence as they walked through the lobby of the host hotel and the convention center. Then, when flying home from another convention we noticed groups of Boy Scouts traveling to/from a Jamboree at the airport, and an idea started to take shape.

Who are these badges for?

Like scouting merit badges and military accolades, you need to earn many of these badges. We’ve initially created badges for haunt owners – from the small home haunt to the massive scream parks – to hand out to their teams. First off, there are attendance badges – one for perfect attendance during the haunt season, and another for 75% or more attendance during the season. These badges are emblazoned with the year, so the more years you work, the more you collect.
The second type of badge are special awards for the talent of the show. As we’re just starting, we only have a few badges that are mostly for actors – creepiest character, scariest character, making the most people pee themselves, being an amazing vocal talent – and will branch out to other awards for other team members, such as the build and makeup crews in future years.
The third type of badge we will produce will be available for purchase by anyone – interests like the type of haunts you have worked at, special skills like lighting or sculpting masks, and for the horror crowd, badges showing your favorite movie genres or being a gore-may chef! These badges will be available in the future. 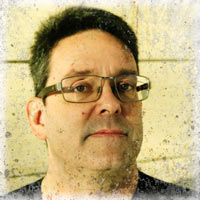 After volunteering as a character actor for 15 years, Darryl decided to dive headfirst into the Halloween world and eventually wound up on a podcast with Brian. From weird ideas through design and implementation, plus packaging and distribution north of the border and world-wide, Darryl has his hands full. 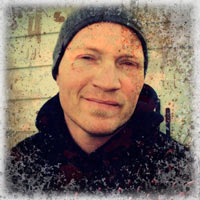 US Packaging, Distribution and Treasury

Brian has done all sides of a haunted attraction, from acting in his own home haunt, running an attraction with family, to teaming up with a business partner for a 10,000 sq. ft. haunt, including building, prop and character design, with a bit of acting still in his veins when he’s not running one of his several websites! As the US based partner, Brian tackles packing and distribution of most of the orders and just keeps everything running.

Where are the badges?