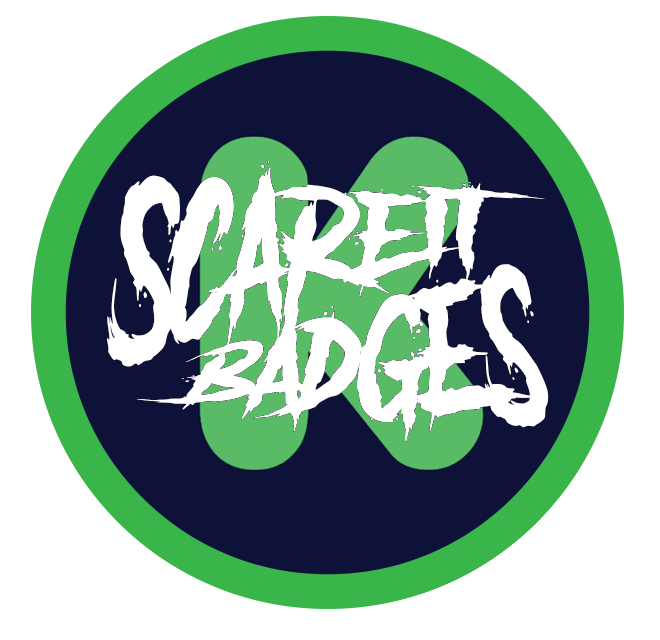 UPDATE: Our Kickstarter project was not successfully funded, though we carry on. You may order badges on our preorder page.

On February 28th, 2018, we launched an exciting Kickstarter Project for all our Haunter fans out there. With the support of our backers we will raise enough money to provide haunts of all sizes with the means to reward their actors for a reasonable cost. Our plan is to have 12 badge designs to start with, and when we meet certain sponsorship goals, release optional designs that anyone sponsoring us can choose from.
While we are still working on the designs, we do have a couple confirmed styles that we completed for the 2017 Season that will be available for 2018 – with the year design updated, of course!

We do have other badge designs in the works including styles for actors, management, behind the scenes crew, creepy characters, very vocal actors, best scare, build crew, and making your customers pee. With your feedback we have even more designs in the works. Let us know what kind of badges you’d like to reward your teams with on our badge survey.

Keep an eye out for our Kickstarter campaign – and feel free to follow us on Facebook, Instagram and Twitter or visit us at HAuNTcon New Orleans in January or other conventions and tradeshows in your area when we can.

What is a Kickstarter campaign?

Kickstarter Campaigns, along with other Crowdfunding platforms, allow money to be raised before creating a product, event, activity or piece of work. Instead of someone funding a new project with their own hard-earned money and hoping something will be accepted by the public, go to the public and ask for their commitment first. If the world shows enough interest by pledging to purchase or support your project, you will know that it will be successful. Kickstarter alone has helped over 137,000 projects raise over $3.4 BILLION dollars!

Evolution of a Badge